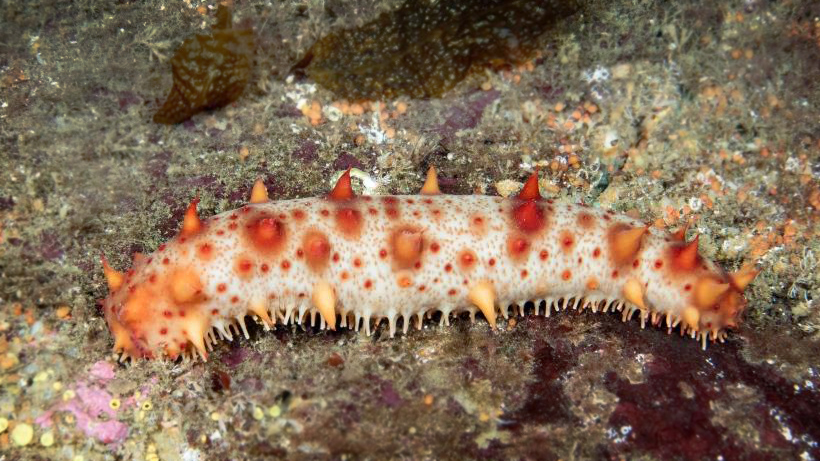 Giant red sea cucumbers are a Pacific species that range from the southern coast of Alaska to Baja California. They live at depths of up to 250 metres, preferring rocky or sandy bottoms. While fairly sedentary, sea cucumbers undergo seasonal vertical migrations.

Giant red sea cucumbers have an unusual body configuration that is radially pentamerous-organized in a circle of five sections-and devoid of a head (or brain). They are long and cylindrical, resembling a cucumber, hence their name. Underneath their body are several tube feet that create suction and allow them to walk across the ocean floor. Giant red sea cucumbers are red to reddish-orange, covered with pale-coloured bumps that look like spines but are actually soft to the touch. They have 20 tentacles on the front end of their body, which they use to feed. Giant red sea cucumbers grow to about 60 centimetres and can weigh up to a kilogram, making them the largest sea cucumber on Canada's west coast. Scientists do not know how to calculate sea cucumbers' age, so their longevity remains unknown. 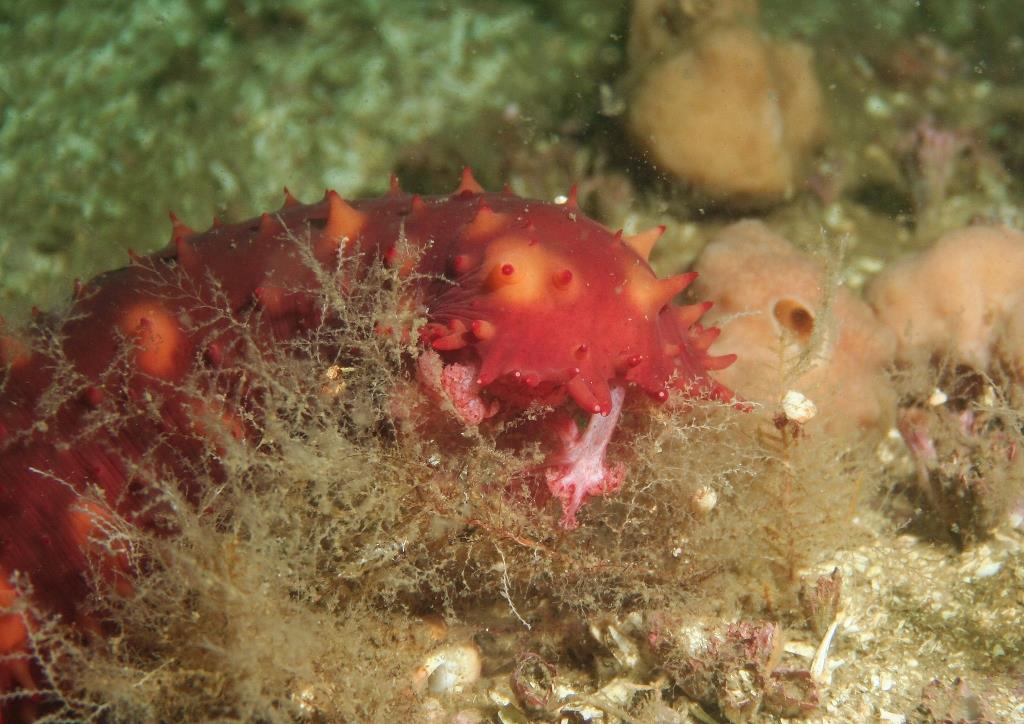 The giant red or Californian sea cucumber (Parastichopus californicus) is the largest of approximately 30 sea cucumber species in British Columbia and the only one that is commercially harvested. Much of sea cucumber inventory, research, and surveys are worked in collaboration with the Kitasoo Fisheries Program. As well, the sea cucumber program has strong collaborations with the fishing industry associations. The PSCHA (Pacific Sea Cucumber Harvesters Association) funds a term biologist position for on-going stock assessment projects as well co-sponsor a masters student at SFU who is working on the feasibility of rotational harvest strategies for sea cucumbers.

Despite many obstacles, the stock assessment division has put great effort into the research and conservation of the giant red sea cucumber.

Growth studies are made difficult because of the sea cucumber's ability to change shape and size, and by annual fluctuations in body mass due to resorbption of visceral organs.

Age determination studies have not been successful due to lack of hard body parts, the lack of structure in the length frequency data and the inability to tag and follow individuals for long periods of time.

There is much to learn about the sea cucumber and the stock assessment division has taken a conservative approach to management of this species in order to avoid over-exploitation and other harmful effects.

Due to a lack of biological data upon which to base management decisions, in 1997, the sea cucumber fishery was classified as a "developing and data-limited fishery" and has since been managed under a precautionary regime known as the Phased Approach for new and developing fisheries.

This precautionary approach has allowed for 25% of the total coastline to be open to commercial fishing, 50% of the coastline is closed to harvest until sufficient knowledge had been accumulated to permit informed management, and the remaining 25% will be used for experimental fisheries, designed to investigate stock response to varying harvest rates.

In a phase 0 review of available biological data, critical information gaps were identified and recommendations for management and further research were made.

Currently, the sea cucumber fishery is in phase 1 of the Phased Approach for new and developing fisheries. This phase includes performing surveys to obtain essential information that was not available in the phase 0 analysis.

In this phase, four Experimental Fishery Areas (EFAs) were set up throughout the BC coast to examine the effects of different exploitation rates on sea cucumber populations. The Kitasoo Fisheries Program, a local First Nations organization, also participates in two Central Coast EFAs. The EFA projects were estimated to require approximately 10 years to yield results and have been ongoing since 1997. As well, surveys and experimental harvests are conducted by commercial or First Nations divers on their own vessels, but under the direction and supervision of a biologist.

In addition to the EFAs, the sea cucumber research program in BC includes open surveys which are conducted in areas of the coast that are open to fishing. Open surveys are used to estimate sea cucumber densities for use in quota calculations, instead of using baseline estimates. Prior to 2004, eight open surveys have been conducted (two of which were re-surveys), covering over 30% of the coastline open to fishing. This large dataset was used to calculate a new baseline density estimate.

The Pacific Region Sea Cucumber Integrated Fisheries Management Plan encompasses the period of October 1 to September 30 of the following year, and provides a focus on the commercial fishery scheduled for approximately 4 weeks in October.

For more information about ongoing research on sea cucumbers at the Pacific Biological Station, please contact: