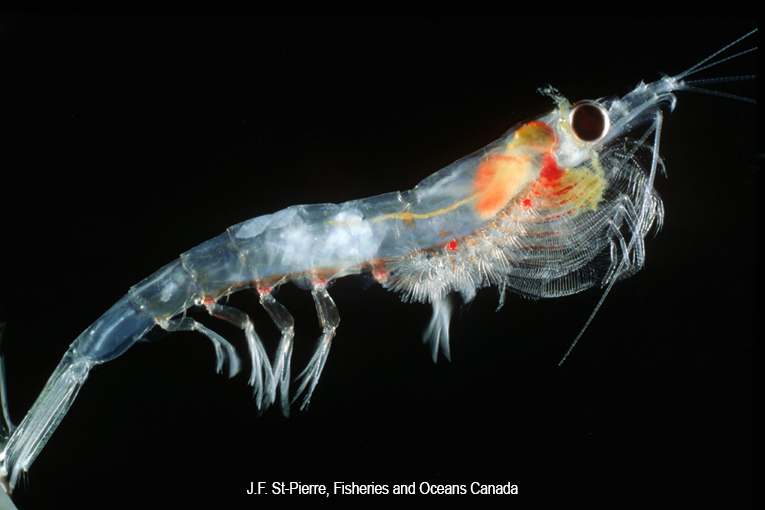 Many different species of euphausiids are found on Canada's east and west coasts. They live in waters that are at least 200 metres deep, although they migrate to less than 50 metres depth during the day.

Euphausiids, or krill, as they are commonly called, are tiny crustaceans found throughout the world's oceans. These zooplankton are a very important part of the food chain in the ocean as they serve as prey for countless species of fish and marine mammals. In fact, some whales eat krill almost exclusively. Euphausiids are usually quite small, with the largest species growing to be only a few centimetres. Krill themselves are normally herbivores, though some species are omnivorous.

Euphausiid species are fished under authority of a limited entry category "ZF" license. These animals are harvested commercially by fine meshed plankton trawl nets. About 23 species of euphausiids occur in B.C. waters, but biomass is dominated by five: Euphausia pacifica, Thysanoessa spinifera, T. inspinata, T. longipes and T. rashii. Euphausia pacifica typically dominates, accounting for about 70-100% of the euphausiid biomass in the Strait of Georgia where the commercial fishery occurs (Jamieson et al, 1990).

Euphausiids, also known as 'krill', are a group of pelagic, shrimp-like crustaceans that play an important role in the marine food web. Euphausiids are members of Phylum Arthropoda; Subphylum Crustacea; Class Malacostraca; and order Euphausiacea.

The life span of E. pacifica is estimated at between 19-22 months with growth cessation occurring in autumn-winter when water temperature and phytoplankton abundance is low (Heath 1977). The estimated life span is quite similar to that obtained in the Toyama Bay, Japan, facing the Japan Sea (Iguchi et al.), but longer than those of Oregon (Smiles and Pearcy 1971) and southern California (Brinton 1976). The differences in life span between the Strait of Georgia populations and their southern counterparts are contributed to the low availability of food in the Strait of Georgia during late autumn and winter and to lower water temperatures compared to southern regions (Heath 1977).

The main spawning season of E. pacifica, off British Columbia, is May to July and a second period of less intensive spawning occurs in late August-September in the Strait of Georgia (Heath 1977). The pulses of spawning activity coincide closely with the period of high phytoplankton abundances.

Euphausiids have separate male and female sexes. Adult males produce packets of sperm, called spermatophores, held in a modified limb which is used to attach the spermatophores to the outside of the female's reproductive tract. Initially, eggs are carried between the female's rear thoracic limbs, later being released into the water, to float towards the surface. They hatch to form a lavae which, once survived predation, grows and moults. Successive moults leave the larvae larger and with more appendages.

Current euphausiid research at both the Pacific Biological Station and the Institute of Ocean Sciences, focuses mainly on the ecological issues surrounding these creatures. The Canadian West Coast supports many fish, bird and mammal species that depend on krill as food:

As one can see, euphausiids are a forage species upon which many other species depend and therefore, management of this species is taking a precautionary and conservative approach. 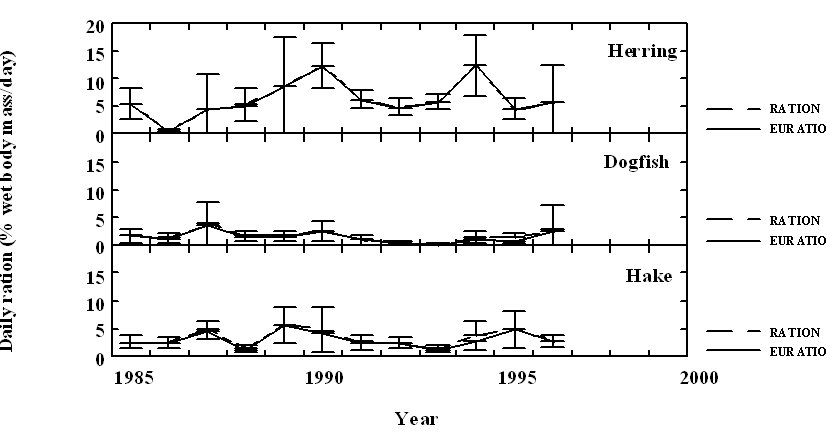 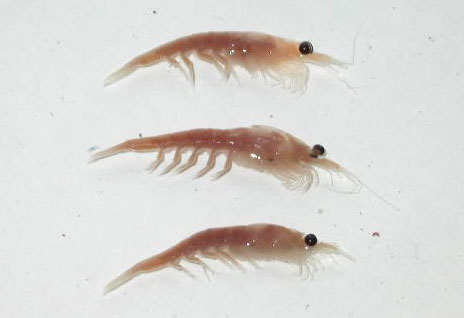 Scientific research has been ongoing since the beginning of the euphausiid fishery in the early 1970's in B.C. However, very little published information is available on these endeavours.

Between 1994 and 1996, acoustical mapping surveys with verification tows were conducted by the Science Branch in Jervis Inlet and Malaspina Strait areas during October and November prior to fishing and again in January and February after fishing. Also, between June 1994 and August 1995, joint departmental and industry monthly surveys were conducted with support from external funding. The results of these surveys are published as a PSARC paper and indicate that the present harvest levels are a small fraction of annual average standing stock (D. Mackas, 1996, personal communication).

In 1998, department staff from the Institute of Ocean Sciences carried out four biomass and distribution surveys in the Strait of Georgia between Turn Point in the Sidney area, and Cape Mudge near Campbell River. The surveys included assessments in the Malaspina Strait and Lower Jervis Inlet areas where the majority of commercial harvest occurs. These surveys were hydroacoustical assessments, performed during daylight hours in February, March, July, and October using standard gear from Canadian Coast Guard (CCG) research vessels. Preliminary results suggest biomass estimates 10 to 15% below the estimates derived from surveys conducted in 1997 (S. Romaine, 2000, personal communication).These results appear to contradict the improved yields and record high catch per unit effort observed in the 1998 commercial fishery.

Surveys have been conducted in the Strait of Georgia from  1997 to 2000 to estimate the abundance of euphausiids using hydroacoustic technology. In April 2000 values for the central Strait of Georgia were estimated at 914,200 tonnes (±51,500) wet weight and August 2000 were estimated at 1,162,400 tonnes (±11,200). Euphausiid concentrations during 2000 were among the highest recorded over the last decade and almost double that of 1999 (Romaine et. al, 2001). These survey results indicate that the total allowable catch (TAC) of 500 tonnes is less than 1% of the total biomass estimate in 1997 and as low as a fraction of a percentage of the estimated biomass in 1999 and 2000.

Scientific research with joint industry, First Nations, and Department involvement is important to justify the low level impact of this fishery as it moves from a precautionary management regime towards a biologically based fishery.

For more information about ongoing research on euphausiids please contact: